Jesse James and Kat Von D Are in Love 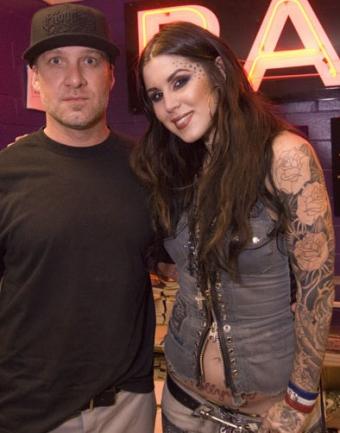 Kat Von D is in the love with the most hated man in America Jesse James. Jesse took his ex-wife Sandra Bullock’s heart and stomped all over it.  Kat Von D is not letting that stop her and had Jesse to support her at  the opening of her Wonderland gallery in West Hollywood on Thursday [09.02.10].  She told People Magazine:

“Jesse is only my ninth boyfriend. I don’t hang out with anybody unless I am in love.”

Kat cleary able to ignore the face that Jesse is a two four timing bum and admitted that the drama in his personal life does not bother her.  When asked if Jesse is the one said:

Apparently the two realized how in love they were (puke) while playing scrabble and of course Kat did not let the Sandra thing face her.

“I stayed away from that as much as possible, and when we connected recently, it was such a positive thing, it was just like, ‘Wow, I can’t believe I haven’t spent this much time with you the entire time I’ve known you.’ Now I’m just embracing it and enjoying it.”