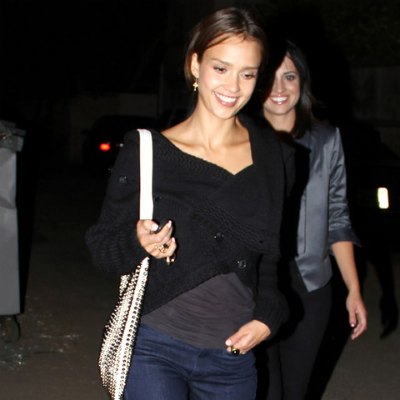 Machete actress Jessica Alba has revealed that she would like to have more children.

She and husband Cash Warren already share a two-year-old daughter, Honor Marie, but Jessica wants to add to her clan.

When asked if she wanted another child, she said, “Yeah, I think so, it’s the best thing ever. So having more kids, I can wrap my head around it.”

And why not? Her daughter is super adorable and happy. They seem like really well rounded people, so they should go for it.

When talking about her daughter to David Letterman, she said, “She’s walking and talking, she has lots of opinions. She talks about everything she wants and needs. She said she wants coffee in the morning. So I give her water in a coffee cup, she likes to have big girl cups and she likes big boy T-shirts and princess dresses. I didn’t even teach her that stuff.”

She added, “I’m very strict with her. When it’s time for her to eat, whether she’s hollering or whatever, it’s time to eat. She gets a time out if she cries for no reason. So then she stops because she doesn’t want a time out. Sometimes she asks me to go to time out. If she does something bad, she’ll say, ‘Honor time out?’ and I’ll say, ‘Yeah, you’re getting a time out.'”

I wonder what they’re going to name their next kid. Any guesses? We’re not starting the baby bump watch just yet, but we’ll see…