Jessica Alba Who Wants To Expand Her Family Takes Honor For A Mother Daughter Lunch! 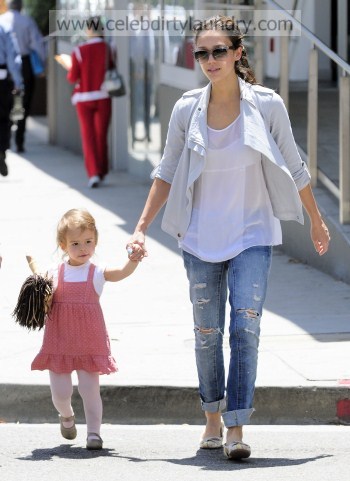 "Machete" actress Jessica Alba strolls hand in hand with her daughter Honor Warren en route to Urth Cafe in Beverly Hills, CA on May 6, 2010.   23-month old daughter Honor Marie, with her husband Cash Warren is their only child, but is broody and wants them to expand their family – either by getting pregnant or adopting.   When asked if she was thinking of having more children, Jessica told Tatler magazine: “Of course! And I feel like I should do it soon. You bring these kids into the world, so you might as well participate.”

Jessica – who rose to fame with roles in ‘Sin City’ and ‘Fantastic Four’ – always planned to be a youthful mother, and was surprised her younger brother had children before her.   Talking about Honor’s birth, she added: “I felt old! My younger brother already had two kids and I’m the oldest.”   Jessica, 29, has previously revealed she and Cash want “three or four" children, and that they are both keen to adopt.

She said: "My mom grew up around a huge family, and they always wanted more kids, and I was like, ‘Why don’t you just adopt?’   "I’m totally inspired. If you have the love, and the capacity to love children, you should just adopt. And I plan on doing it."   Photo: Fame Pictures