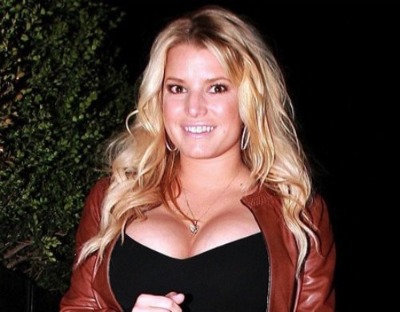 In an attempt to quell all of the pregnancy rumors surrounding her as of late, Jessica Simpson was tossing back drinks with her fiancee, Eric Johnson, Tuesday night.

She’s been plagued by rumors that she’s carrying a little Johnson lately, and coupled with the fact that she’s looking to have a quickie wedding, it would seem that she is pregnant. Besides all of that, she has gained a little bit of weight recently, also adding fuel to the fire.

She and Eric hit up Stanton Social club on Tuesday night, after she performed at the Rockefeller Center tree lighting. She was spotted downing margaritas and tequila shots, putting those rumors to rest once and for all.

The singer took a table of 20 which included father Joe Simpson, her assistant and security guards. A spy told us, “They were very well-mannered and drank basil lime gimlets, pineapple 75’s, Maker’s on the rocks, margaritas and wine. They ordered a lot of food. Jessica let her guard down enough to steal a few kisses from her fiancé in front of papa Joe. Jessica, Eric and the crew settled on shots of Don Julio to finish out the evening.”

She has said that she’s not pregnant, but still, we relented. I guess this will shut us up, for a minute.