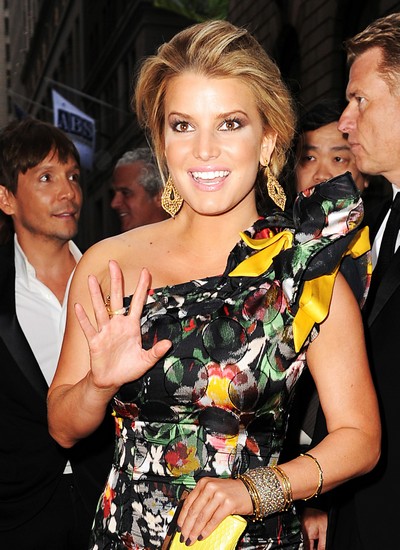 Poor Jessica Simpson just can’t seem to be lucky in love, at all!

Jess had a romantic, hot and sexy romance with John Mayer, but he blabbed about her “sexual napalm” to the entire planet. Then, she hit it off with Dallas Cowboys hottie, Tony Romo. He ended up dumping her in an iHop parking lot the day before her birthday. Now, this yokel, Eric Johnson, is spending all of her money and it doesn’t bother her one bit.

I can’t imagine getting all excited, thinking that this is the guy for you and you really want to spend the rest of your life with him and purchasing your OWN three-carat engagement ring. Reportedly, Jess took matters into her own hands and went to the jewelry store and bought her own big, fat sparkler.

Now, he doesn’t have to worry about looking like a dolt in front of anyone. And it was their little secret….well, at least it was. He was reportedly worried that he wouldn’t make enough money for them to have a life together, but she’s taken care of all of that. Her point was that she had enough cash for the both of them, but it’s just coming off like he’s using her.