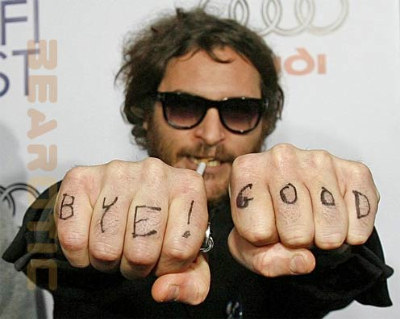 Remember when Joaquin Phoenix said “Bye, Good” to Hollywood and his movie career and said hello to being a flop as a rapper and hair cut enthusiast? Well, his new trailer for the mockumentary (?) for I’m Still Here has been released. And it’s weird.

The movie trailer makes it sound like Joaquin really had some deep and meaningful experience with finding himself, but there’s some part of me that thinks Ashton Kutcher is going to come out with a camera crew at the end and shave Joaquin’s beard off.

Check out the trailer for yourself:

Aren’t you jealous that he’s a “mountain top water drop” and you’re not?

What’s most important is whether or not he’s continuing his razor boycott. He was a decent enough looking guy before he went all Spencer Pratt, but since, he looks homeless. I hope he’s found his shaving tools.