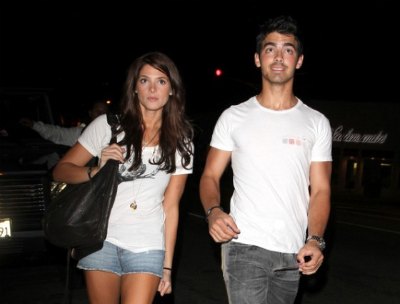 Joe Jonas and girlfriend Ashley Greene were on their way back to New York from Abu Dhabi when they were stopped by security personnel at an airport due to some knives he had stashed away in his carry-on bag.

She said, “We were going from the Middle East to New York, so there was tons of security, tons of screenings. We got through one, surprisingly enough.”

But, they fell into a bit of a panic when they hit the second one, because Joe forgot that he purchased some cheese-cutting knives during their trip, but had them put in his carry-on luggage.

She said that the airport security “looked at us with these stern faces like, ‘What’s in your bag?'” When the knives were discovered, Joe said, “Whoopsies!”

She said, “Whoopsies doesn’t cut it. We were going to get arrested!”

Luckily for them, they explained themselves to the security officers and were allowed to put the knives in the storage area under the plane. She added, “It was embarrassing.”

I guess it would’ve been more embarrassing if they were arrested and thought of as terrorists. Do you think they got special treatment??