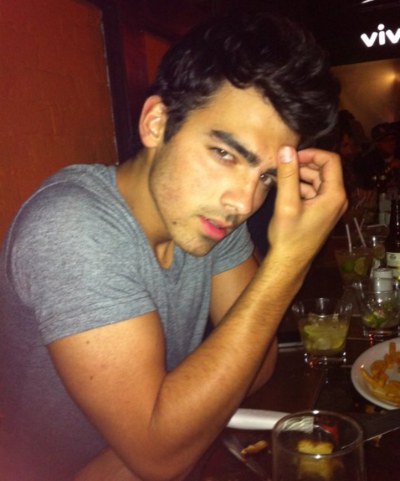 A source in Brazil said that Joe Jonas was making out and heading back to his hotel room with random girls….all the while, his girlfriend, Ashley Greene was back in Los Angeles!

During the Jonas Brothers’ concert in Rio de Janeiro, Joe was seen with several random girls, prompting one spy to think that he was cheating on Ashley. She said, “After the concert we saw the boys having dinner, and Joe in particular was having a few beers and cocktails. We didn’t want to disturb them so we just waited around patiently. Nick and Kevin went upstairs, and so did some of my friends. I waited around with my sister, as Joe walked past us with dancers Shorty, John, Dani, Jack and Ashlee. They went to the pool and were having a party, I decided to go back to my room. It was pointless to stand around and wait for them when he didn’t care to take pictures or sign autographs.”

She also revealed, “The next I woke early and went down into the lobby where a mom was complaining about how her 14-year-old daughter was crying all night because she couldn’t get a picture with Joe since he was so intoxicated and making out with a random tan brunette in the pool around 3 AM. Immediately, other fans gathered and started discussing it because they too saw Joe from the part of the hotel building playing ‘towel snatch’ with the girls.”

A mother at the same hotel told her, “After their pool party I took the same elevator with Joe, an unidentified girl, and two of their backup dancers Dani and Shorty. Both dancers were nearly nude with only a towel covering their private parts, while Dani would slip the towel slowly off her body and say, ‘Oh Joe, you like what you see?’….in a playing matter of course. Once we reached their floor, Joe departed the elevator hand in hand with the unknown girl, while both dancers left making out.”

Joe, you bad boy, you! I hope Ashley dumps him if any of this is true!