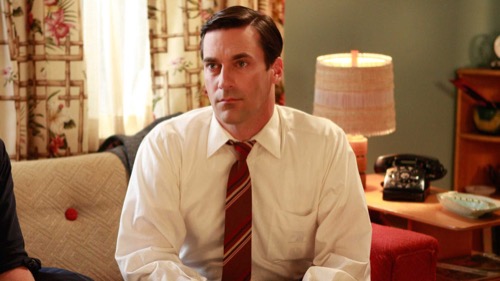 Yes, Jon Hamm the stunningly handsome star of the hit series Mad Men used to work in the movie industry!   But perhaps sadly he was not in front of the camera, rather he was a grip arranging sets and assisting in general production work.

This was no glamour job for the talented Hamm, 12-hour days and low wages barely provided him with a living wage.    This was definitely not what John was looking to do with his life but there just wasn’t any easy entry for him at that time to the “big time.”   Fortunately, his girlfriend, Jennifer Westfeldt, was working in New York City on a play called Lipschtick and she was able to get him a part in it – when he got home after another 12-hour shift she had left a message on the answering machine to that effect.

He called back immediately saying he’d take the part, borrowed money for the airplane ticket, slept on friend’s couch, roller-bladed for transportation about town, and lived on $50 a week – all to get away from the dead-end  job and to establish himself as a legitimate actor.

Well that was then and this is now – and John Hamm is one of the hottest properties in entertainment today.    But as we see in the above story it didn’t come easily for him and that makes it all the sweeter now!    You can see John in the feature films Howl, The Town, and Sucker Punch to be released in 2011.