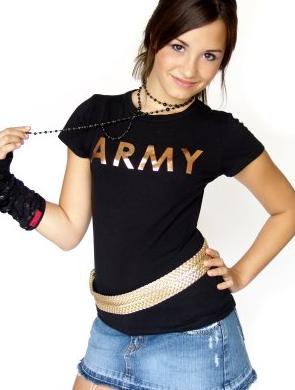 In a sudden unexpected move Demi Lovato has stopped touring with the Jonas Brothers and checked in a Rehab center.  Her rep say that there are no drug or substance abuse issues involved here – rather it seems that a fist fight or at least a physical altercation with a female member of her tour is what triggered her decision to seek rehab.  Her people say that Demi is taking this time off work to deal with emotional baggage and physical issues that she has been laboring with for some time.

TMZ reports, “Demi has decided to take personal responsibility for her actions and seek help.  She is doing just that.  [Demi] regrets not being able to finish her tour, but is looking forward to getting back to work in the near future.   Sources close to Lovato tell us the singer was in a physical altercation with a female member of her tour recently … which was a “catalyst” in her decision to seek professional help.

Looking at some of her pics it appears that she might just be flirting with some anorexia or other dietary issues.  Being on tour is known to be super exhausting and stressful – it can bring out the worst in people – and perhaps Demi is suffering from anger management issues as well as whatever else is troubling her.  One thing we can count on is that over the next few days we will find out exactly what is wrong with Demi.

Question is, will the Beiber minders, the folks who guard and try to control Justin’s every step allow him to continue to see Ms. Lovato?  Or will her stint in rehab render her an unfit chick for the Biebster?  After all, little Justin can have any girl in the world so why should he settle for someone who is loosing control over herself?  Or does he love her enough to help her deal with this problem and work through it?