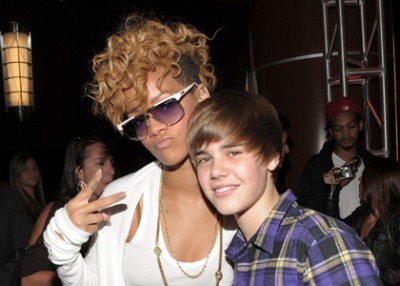 On Monday, Rihanna tweeted that she got flashed by Justin Bieber! She said, “Justin Bieber just flashed me his abs in the middle of a restaurant! Wow! He actually had a lil 6 pack! Sexy, lol!”

RiRi and the fetus enjoyed dinner that night in Manhattan with a bunch of friends. A snitch said that, as the meal progressed, “Justin started bragging about how he has abs. Everyone started laughing but Justin was serious.”

After a little while, Rihanna and their friends asked Justin to show them. The source added, “Justin took off his jacket, glasses and lifted up his shirt. Apparently he does have a little six pack! The table was hysterical.”

Do you want to see Justin’s abs???