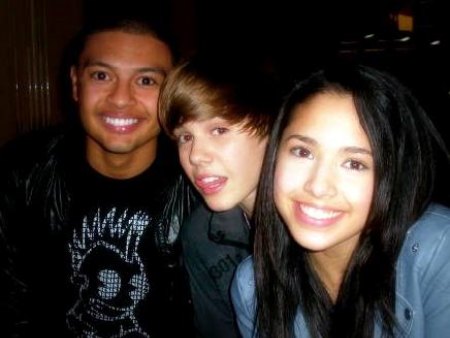 Justin Bieber was spotted kissing with his tour-mate, Jasmine Villegas, in the back seat of a Honda a couple of week agos.   We have been hearing that he wants to get closer and closer to her.   But, Justin’s mom Pattie Mallette after seeing the pics and fearing her son is getting out of control has banned Justin from dating.  She does not want the romance to jeapordize his career.

“Pattie’s freaking out that she’s losing control of her boy,” a source said. “And she’s afraid that his obsession with girls is sapping his time and energy, and jeopardizing his music career.  “Pattie warned her son about Hollywood social climbing and told him Jasmine could be just using him to further her own career.  “But it pretty much went in one ear and out the other. When it comes to girls, Justin’s out of control.  Right now his mom says girls are a complication he doesn’t need.”

I can hear all the Beliebers letting out a sigh of relief.  Mommy is going to take care of Jasmine :-)