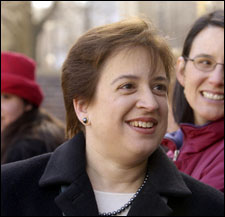 Elena Kagan is not a lesbian, one of her best friends told POLITICO Tuesday night, responding to persistent rumors and innuendo about the Supreme Court nominee’s personal life.

“I’ve known her for most of her adult life and I know she’s straight,” said Sarah Walzer, Kagan’s roommate in law school and a close friend since then. “She dated men when we were in law school, we talked about men — who in our class was cute, who she would like to date, all of those things. She definitely dated when she was in D.C. after law school, when she was in Chicago – and she just didn’t find the right person.”

Walzer, half amused and half appalled to be discussing her friend’s sexual orientation, agreed to be interviewed after Kagan’s supporters decided they should tactfully put an end to the rumor, which White House officials had already tried to squelch in background interviews with reporters.  To read the rest of this story visit POLITICO.