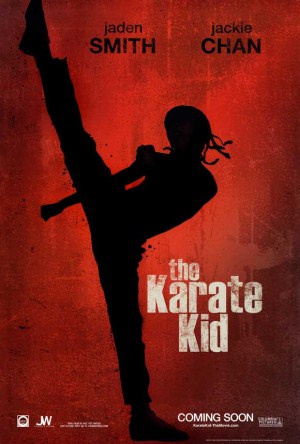 Columbia Pictures’ "The "Karate Kid" earned an estimated $56 million during its first three days, vanquishing 20th Century Fox’s "The A-Team," a distant No. 2 with $26 million.   Both films had been expected to vie for top spot – each in the $30 million range.

I saw the "Karate Kid" on my Friday movie night and I was glad I did.   Jackie Chan was both humble and brilliant putting in his best ever performance – a really good acting job – would love to see him get a nomination by the Academy next year – the man displayed a range of acting talent from the physical comedy for which he is best known to a degree of genuine pathos that saw him excel in a difficult new territory without being at all campy.

Jayden Smith was great as were the supporting cast of other young teens.   Jayden’s mom, Sherry Parker, was the one weak link in an otherwise excellent cast – of course she also had to deal with what was mysteriously, and in her case only, a terrible script!

Haven’t seen the "A-Team" yet but if the box office can be trusted I don’t think I need to!