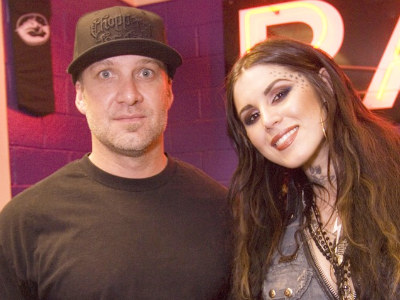 According to reports, there’s a reason why Kat Von D is clinging on to Jesse James – she’s pregnant!

Even though the thought of them together is enough to make her ex-boyfriend of two-and-a-half years, Nikki Sixx, gag, we’re hearing that she’s carrying Jesse’s baby!

And you thought that they moved fast when they got together?!??

The two tattoo enthusiasts have been very open regarding their new romance and this has sources wondering why. Some of this stems from an event that took place Sept. 2 at Kat’s Wonderland Gallery — the two walked the red carpet together for the first time. At this event, HollywoodLife.com noticed that Kat was looking rather “bumpish” but we still weren’t sure. But In Touch Weekly is reporting that Kat could very well be expecting a child.

I just don’t think it’s wise for them to have a baby this soon. It seems like just yesterday that he was cheating on Sandra Bullock in the midst of her adoption of adorable baby Louis.