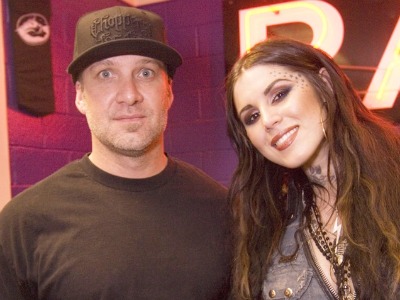 Kat Von D has sparked rumors that she and Jesse James are engaged to be married, after she was spotted wearing an antique engagement ring during a recent book signing.

After dismissing the reports that she and Jesse had split, in favor of a relationship with ex-boyfriend Nikki Sixx, Kat had an intimate brunch with Jesse to quell the rumors.

She refused to confirm or deny the engagement rumors, but happily talked about the ring. She said, “I don’t know if I really feel comfortable talking about it.”

However, she went on, “It’s actually a ring from the 1900’s…It’s been an addition to all the rest of my jewelry and my Victorian collection. They don’t make things like this anymore. There’s no more craftsmanship in a lot of things.”

I wonder if it’s true. What do you think?