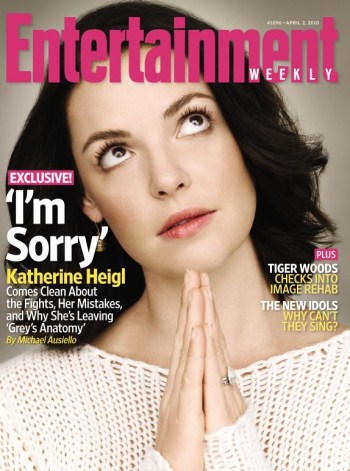 Via Entertainment Weely "I am done," declares Heigl. "We just finalized our agreement. Everyone had been working really hard to find an amicable and gracious way of letting go and moving on. It’s sad but it’s what I wanted."

The 31-year-old actress reveals that it was family issues, not her burgeoning film career, that prompted her to approach series creator Shonda Rhimes and ask to be let out of her contract 18 months early. "I started a family and it changed everything for me," says Heigl, who took a three-month family leave from Grey’s this season to bond with her newly-adopted daughter, Naleigh. "It changed my desire to work full-time."

Although she was scheduled to appear in this season’s final five episodes, that is no longer happening. As a result, the Jan. 21 episode was her last as Izzie. "I know I’m disappointing the fans," she says. "I just had to make a choice. I hope I made the right one."   To read the rest of this story visit EW.