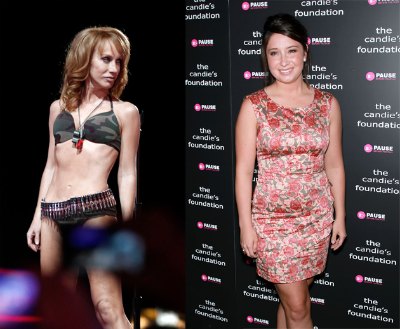 Last Friday, comedian Kathy Griffin really laid into Bristol Palin for her appearance on Dancing With The Stars, while performing her routine for VH1 Divas Salute The Troops. She claimed that the “teen activist” (cough, cough) gained thirty pounds a week on the show, while most of the celebs lose weight. She even called her the “white Precious”, which was just hilarious.

Bristol responded with a more calm approach, saying, “The audience’s reaction to this ‘comedian’ spoke volumes, and the decent people I know would probably have booed her, too. I hope people didn’t have to pay money to hear her negativity and criticisms.”

Now, Kathy is defending herself against those who claim that she was trying to bully Bristol. Kathy went on fellow comedian, Chelsea Handler’s show last night to talk about the situation. She said, “I made several scandalous jokes, as I like to do, and I stand by all of them. There’s a big difference between being a comedian and bullying. It is a job. It’s what we do.”

Chelsea also came under fire recently for calling Angelina Jolie a “homewrecker”. She said, “If you take anything any comedian says seriously then you’re stupid and you need to get something else going on. When you act irresponsibly and you run around the world like Lindsay Lohan, you’re going to get made fun of by me.”

Did you expect either of them to apologize? I surely didn’t!