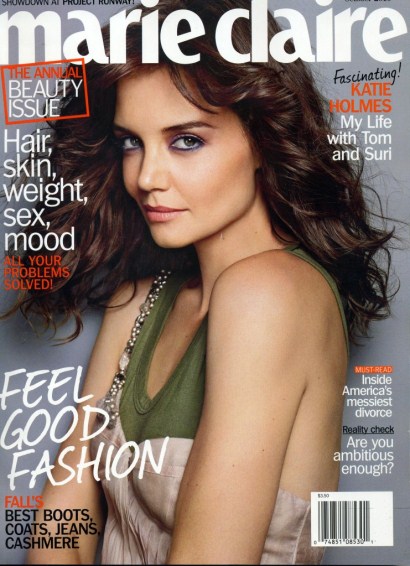 Katie Holmes graces the October 2010 cover of Marie Claire.   Katie  is currently filming “The Kennedy’s” in Toronto and promoting her latest film The Romantics – which premieres September 10sat down with Marie Claire.  Below are some highlights of the interview which apprears in Marie Claire.

On what it’s like being Mrs. Tom Cruise: “It’s really exciting. Tom’s as big at home as he is on the movie screen. He’s so passionate about everything, whatever he’s doing. When he’s being a dad, he’s right there;he’s giving it his all. It’s inspiring and it’s fun. It’s an amazing life, but we always remind ourselves of how incredibly lucky we are.”

On having more children: “Maybe in a couple of years, but right now I want to make sure I’m really there for Suri. I’m the youngest in my family-my closest sister is 5 years older than me, and the next one is nine years ahead of me, so I was a bit of an only child, and I liked it! I liked having all of my mom’s attention, and sometimes I think I still do.”

On what part of her upbringing she hopes to pass along to Suri: “We travel a lot, and so for me, it’s keeping a daily schedule for Suri that never changes. We wake up, and we do the same thing. She does her chores. I think it’s very important. If she doesn’t get her chores done, I notice she’s not really herself. She has to make her bed, she has to take her dishes to the sink, she has to put her clothes in the laundry — you know, that basic stuff. I try to do what my mom did for me … just spending time with her, making doll clothes and planting in the garden … When Suri comes to the set, we have art projects, and I just try to keep her busy and inspired.”