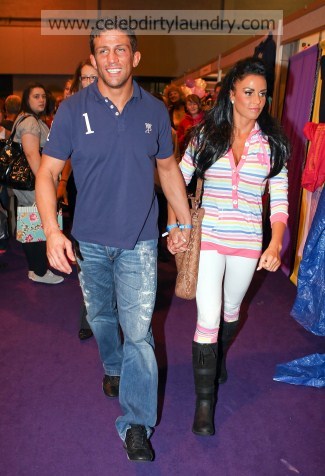 The former glamour model Katie Price – who married the cage-fighter Alex Reid in a Las Vegas hotel last week – is planning a lavish bash in Britain for their family and celebrity friends who were disappointed not to be invited to their secret ceremony.

Alex – who won UK reality TV contest ‘Celebrity Big Brother’ days before they flew to the US – revealed: “We went to Vegas for the wedding because we really did want to keep it private and not have the whole of the press following our every move.

“People have said it’s a shame that lots of our loved-ones weren’t at the wedding, but we are going to have a big party with them back in the UK soon.”   Although the ceremony itself was fairly simple, the pair celebrated their wedding night at a strip club with a few of their closest friends, including Alex’s best man Josh Hathaway, Katie’s agent Diane Colburt and her two gay best friends Gary Cockerill and Phil Turner, who gave her away.

Alex wrote in his column for Britain’s Star magazine: “So, me and Katie have done it – we’re married! I feel incredibly happy. After winning ‘Celebrity Big Brother’ and then this, I’ve had the best week of my life.   “I don’t want to go into too much detail but Katie, of course, looked stunning.

“To celebrate the wedding, we went to the Sapphire Gentlemen’s Club. A mate of mine owns it and he said to come along. So we did! It was a real laugh – a bit tongue in cheek – and, of course, we had loads of champagne there. But it wasn’t just topless girls – the gay mafia were out in force, too – and it was actually a nice sort of family atmosphere. It was a big night, as you can imagine!”

The pair even hired a butler in the days following their wedding to look after their every need.  He said: “We stayed in the penthouse suite at the Planet Hollywood hotel, which is like three apartments in one. Our room had the best view across the strip and our bed was enormous – like a football pitch!  And we had a butler on call at all times. I’m so lucky and feel very blessed at the moment.”  Photo: Flynet Pictures