Katy Perry Needs A “Liver Transplant” After Her Bachelorette Bash 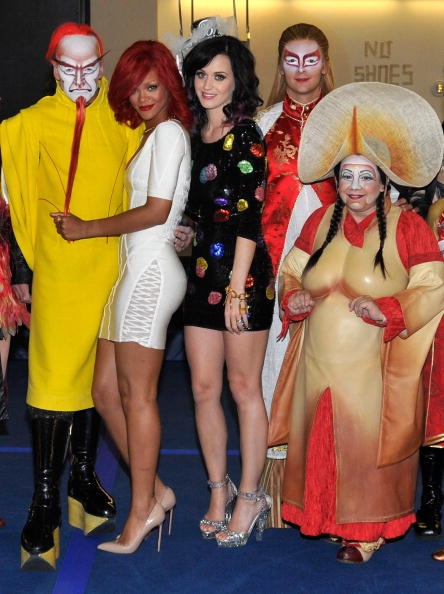 Katy Perry – who is engaged to Russell Brand – enjoyed a “risque” night with around 25 female friends in Las Vegas on Saturday night (18.09.10), including her pop star pal, ahead of her upcoming wedding ceremony.  She tweeted yesterday morning (19.09.10): “Signing up for a liver transplant now.”

According to OKmagazine.com, the group wore “typical risque bachelorette-themed party items” – with Katy wearing a hat and veil with the word “Bride” attached – as they enjoyed food and drinks at the Casino Tower and the Hard Rock Hotel and Casino.  The women then jumped into a stretch limousine and were driven to the MGM Grand, where they watched a performance of Ka by Cirque du Soleil.  After posing with the show’s dramatically-dressed gymnasts, the group returned to Katy’s hotel suite where they continued the party in private.

The 25-year-old beauty was even presented with an “erotic” cake to celebrate her last few weeks as a singleton.   Reminiscing back over the weekend, Katy wrote on twitter “That’s what you get for waking up in…”, a lyric from her hit single ‘Waking Up in Vegas’.  It has been a hectic few days for Katy, after her fiance Russell was arrested at Los Angeles International airport on Friday (17.09.10) after attacking a paparazzi photographer for allegedly trying to take an intimate photo of her. Russell was handed the misdemeanour charge of simple battery.    Discussing the event on twitter, Katy wrote: “If you cross the line & try an put a lens up my dress, my fiance will do his job & protect me. #standbyyourman #don’tf**kwiththeBrands (sic)”