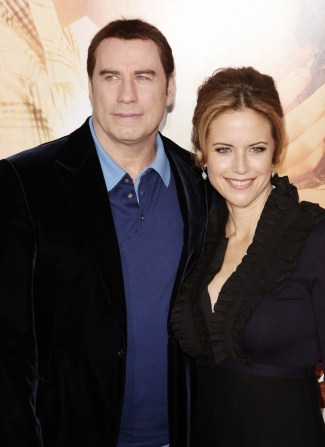 Kelly Preston and her husband John Travolta – whose 16-year-old son Jett died after suffering a seizure in January 2009 – recently revealed they are expecting a baby, and her mother Linda Carlson believes the new addition is just what the couple and their 10-year-old daughter Ella need to get over their grief.

Linda said: "We are over the moon I’ve been praying that this would happen, especially since Jett’s death. Anything to get them out of their sorrow. I know Kelly has been longing for another baby. She just loves babies! So do I. I just can’t wait for this child to arrive. It’s taken them out of such deep grief and made them able to focus on new life.   "It couldn’t come at a better time. Her aura is so filled with peace. It’s changed their lives."   Linda has promised the baby will be taught all about their late brother as they get older.   She added: "He’ll see the pictures and he’ll be told stories. He or she, whatever."

Despite her advancing years, 47-year-old Kelly is not concerned about the effect her age may have on the baby’s health.   Linda said: "She’s not worried about it at all. She’s not concerned. She takes really good care of herself and she’s in good health. She looks so much younger."   Shortly after Jett’s death, the family were victims of an extortion plot, which Linda believes worsened their grief over the teenager’s passing.   She added to Usmagazine.com: "They have been through so much. Not only losing Jett but those horrible men trying to extort them! Unbelievable. It was awful on them, they were grieving so badly. They do weather it, but holy cow, such grief. John was devastated, just devastated."