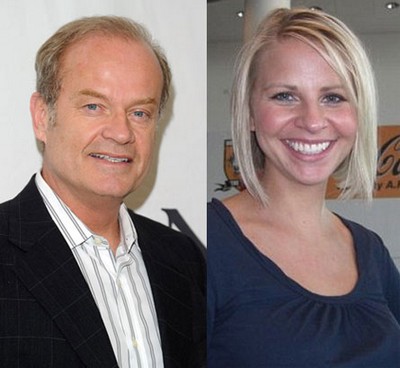 Wasn’t it only half a minute ago that we all learned the Camille Grammer, Kelsey’s third wife had filed for divorce? Now, we’re just learning that Kelsey has already started dating some new trick AND has knocked her up!

Kayte Walsh is a 29-year-old Virgin Airways flight attendant who just started hooking up with Kelsey…at least that’s what we’re told. I guess the sonogram will tell the true tale of their relationship.

Was he cheating on Camille with this new chick? It seems that they’ve moved lighting fast from “Hi, my name is Kayte, can I get you a drink?” to “Kayte, future mother of your kid.”

Her father digs the idea (of course he does). Alan Walsh said, “It’s great news and we are very pleased for them both. I don’t know how long they have been together and I have not met him yet, but I’m looking forward to it. We just found out about her pregnancy a couple of days ago. I think they met in New York socially because she works for Virgin Airways and often stops over in America. The main thing is for them both to be happy and they are – they have just hit it off together.”

Awww, cutsie pie lovey dovey love birds who just hit it off. I just don’t get it, she’s pretty and he reminds me of a lizard.