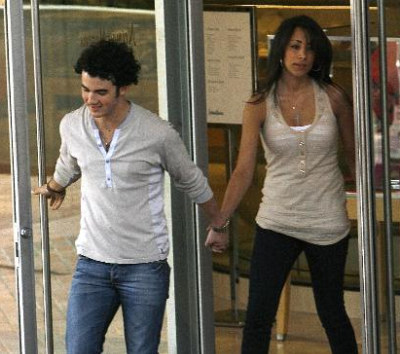 I had no idea that Kevin Jonas and Danielle Deleasa were in the process of trying to bring a baby Jonas into the world. Apparently they were, at least, until Kevin’s uber-annoying snoring got in the way.

Reportedly, Kevin snores like a freight train, making Danielle sleep in another bedroom. A close pal reveals, “They’re totally in love and really want a baby, but Danielle can’t stand Kevin’s snoring, so she’s started sleeping in the guest room.”

Kevin thinks she should have to put up with his crap. The spy adds, “It’s become this huge problem between them.”

Danielle has been trying to get Kevin to go to a sleep specialist and to start wearing a special sleep mask so that they can both breathe a sigh of relief.

But Kevin says it would be uncomfortable to wear. Plus, he feels if Danielle had to sleep “next to a guy wearing an anti-snoring device, it would certainly not get her in the mood for love.”

Kevin is hoping Danielle will eventually adjust, but for now, he’s given her a pair of heavy-duty ear plugs. Still, she usually sneaks out of the bedroom after Kevin falls asleep, says the source.

“She is frustrated. And losing sleep is making her even crankier.”

One word for them: Ambien. Just ask Tiger Woods.