Khloe Kardashian Made A “Love Tape” For Lamar Odom 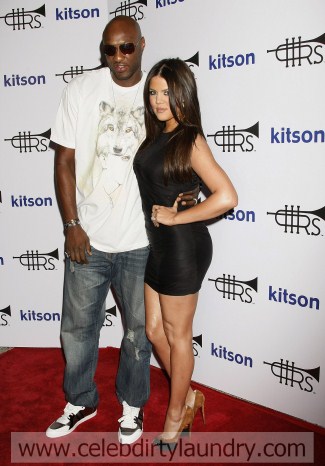 The socialite Khloe Kardashian – who wed the Los Angeles Lakers basketball star Lamar Odom in September – has made a romantic video for her spouse to watch when they are apart, but is adamant it doesn’t contain any x-rated footage.

She said: "It’s not a sex video. It’s called a love tape. I made a collage video of all the things that he loves. He loves candy, so I filled up a whole bathtub of candy while my sister Kourtney taped it. It was just a love note. I put the video in his bag for when he goes on road trips. I don’t do sex tapes!"   Khloe recently admitted she was considering filming a "solo sex tape" for Lamar, which would contain footage of her pleasuring herself.   While she has put these plans on hold for the time being, Khloe has admitted she could be tempted to record an intimate video with Lamar in the future.

She explained: "With my husband, I can’t say what I will or will not do in the future. I won’t know until I’m in that moment."   Khloe has also confirmed she has stopped taking her birth control tablets, but insists she is in no rush to fall pregnant.  She added to Steppin’ Out magazine: "We’re not stopping ourselves from having kids… We’re just being a healthy married young couple… I’m not sitting here staring at an ovulation calendar.   I’m not saying to Lamar, ‘Okay, it’s time, let’s go!’ Yes, I’m not on the pill, but people stir my words around. Let’s just say sometimes I talk too much."  Photo: Fame Picture