Kim Kardashain Slutting It Up For Prestige Magazine 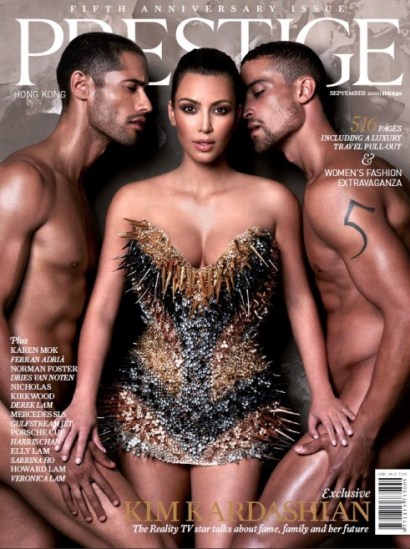 This is the first image of Kim Kardashian’s Hong Kong Prestige Magazine cover.    The horrid spiky dress complete with an arrow pointed to Kim’s “yoo hoo” was designed by The Blonds and manages to make Kim look decidedly chubby.    The arrow highlights the only part of Kim that has ever been famous-yes we are talking her brief whirl in the Celebrity Sex tape world.    But really folks, when you are posing with two superslim six packing models its not wise to appear face on, making  you look as though you outweigh them both.  Watch out boys be careful that you don’t get barbed.

I have never understood the big deal made about Kim Kardashian.  At least Paris Hilton gets arrested, takes drugs and has a prominent case of herpes-whereas it’s unclear what is Kim’s claim to fame.    She sluts it up for money- she is nothing but a cheap bimbo and as far as I am concerned bimbos are a dime a dozen… next please