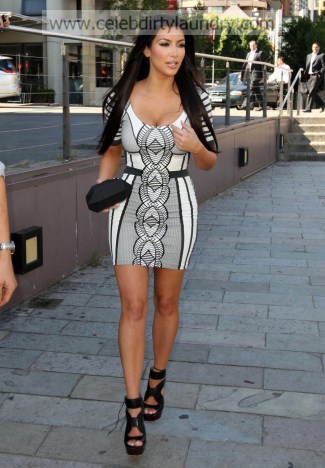 Kim Kardashian was astonished by the outpouring of messages she received after tweeting she had “Bieber fever” after meeting the teenage heartthrob at the White House Correspondents’ Dinner in Washington on Saturday (01.05.10).   In a message directed at Justin – who posted a picture of them together describing the brunette beauty as his girlfriend – she tweeted: "I’m getting death threats from your fans! This is unBeliebable!!! (sic)"

The 16-year-old singer was shocked, responding with: "Seriously?"   This is not the first time the ‘Baby’ hitmaker’s followers have caused problems recently.   His female fans knocked over his mother as they mobbed him at a New Zealand airport last month.   The Canadian teen sensation was rushed through the terminal building to escape hoards of screaming teenagers, who stole his hat as they stampeded.

He later tweeted: "Finally got to New Zealand last night. The airport was crazy. Not happy that someone stole my hat and knocked down my mama. Come on people."   Police told the singer to axe plans to sign autographs and take pictures with admirers amid fear the crowd would get further out-of-control, prompting many of the waiting group to burst into tears.  Hoards of fans also forced the cancellation of a scheduled appearance by the 16-year old star in Sydney, Australia, recently.

Police reported "mass scenes of hysteria" and 10 girls fainted as they waited through the night to watch their idol perform. Paramedics treated the injured on the scene, and the worst injury was to one fan who fractured their kneecap.  Photo: Fame Pictures