Kim Kardashian Is Dead In A Coffin For Charity 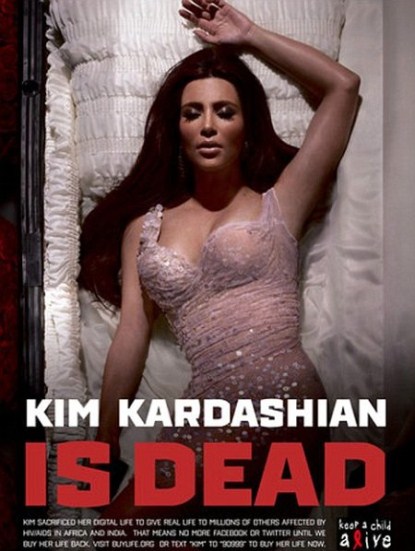 Kim Kardashian photoshopped to death is promoting an internet campaign in which stars including Lady Gaga, Justin Timberlake and Usher will quit social networking sites Facebook and Twitter until $1 million is raised for charity.   The Digital Life Sacrifice where many stars have filmed ‘last tweet and testament’ videos is being organised by Alicia Key‘s Keep A Child Alive charity for World AIDS Day on Tuesday.

The charity is a great cause, but the ads are very distasteful – the stars are doing this for the free publicity one million between these multi-millionaires is nothing they spend that on cosmetics each month.   Surely they could have gotten the $1 million together and donated it instead of resorting to such an unpleasant publicty stunt.  What do you think?