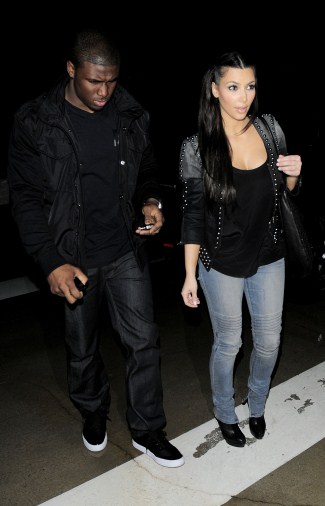 29-year-old socialite Kim Kardashian has reportedly been pressurising the  football player – who she has been dating on and off for three years – to tie the knot and start a family ever since her younger sister Khloe Kardashian wed basketball star Lamar Odom last September.   However, the sportsman is convinced Kim isn’t “the right kind of girl” to spend his life with.

A source told E!: "Kim has been pushing for marriage, especially since Khloe got hitched, the pressure’s been on. She feels it’s the next step for her and Reggie.   But Reggie knows deep down in his heart that he doesn’t want to marry Kim. He basically put it on the line for her – he wants a wife that is a support system to him and would be a stay at home mom to his children.

"Reggie loves Kim but he knows that’s just not her. He loves her drive and ambition, and he thinks she’s amazing, he truly loves her, but he knows she’s just not the right kind of girl for him to marry.”   Kim is said to be devastated about the split, because she was hoping to follow in the footsteps of her other sister Kourtney Kardashian – who recently gave birth to son Mason – and get pregnant soon.

The source said: "Kim is devastated, she loves Reggie with all her heart and truly believed that he would be her husband and the father of her children. She’s so maternal and is really in the place for kids right now – that’s just been amplified by the birth of Mason, her nephew.”

While Reggie loves Kim’s “ambition”, he apparently dumped her because he doesn’t believe the brunette beauty “fits” into his sportsman lifestyle.   The source added to RadarOnline.com: "Kim is so caught up in the whole Hollywood thing, and that’s totally not Reggie’s scene. He’s a ball player, that’s his career and his life, and he just feels that Kim doesn’t fit 100 per cent into that.”   News of their separation comes less than a month after the couple reportedly bought a $4.8 million love nest together in Beverley Hills.