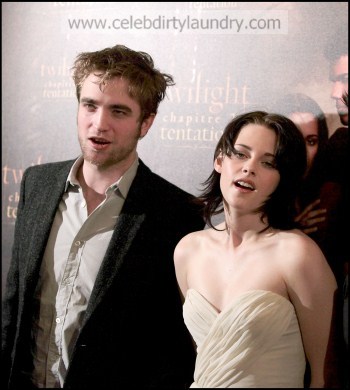 The 20-year-old actress – who stars alongside the British heartthrob in ‘The Twilight Saga’ movies – said she feels strongly for her co-star because he has a childish side.   She said:

"I love Rob because he always wants to be the best. He can be very childish. When Rob does something right or wins something he talks with a different, little voice – like a five-year-old.   "Rob is sexy, in a tortured artist way. This might be because he is British. He’s tall, looks like he is thinking all the time and is incredibly funny.   "I love the way he sings. It breaks my heart. And don’t you think he’s just gorgeous? Rob’s also a very bad liar, he just can’t do it!"

The American star also claims Robert once proposed to her for a joke.  She told the News of the World newspaper: "He asked me to marry him.   As a joke, though. Well at least I think so."   The couple have been rumoured to be in a relationship since they first met on the set of the vampire movies, but have never officially been seen together, despite rumours they were going to reveal their status at this year’s BAFTA Awards.   Speaking at London’s Grosvenor House Hotel at a post-BAFTAs dinner  this year, Robert said: "It is extremely difficult but we are  together, yes. We can’t arrive at the same time because of the fans, it goes crazy."