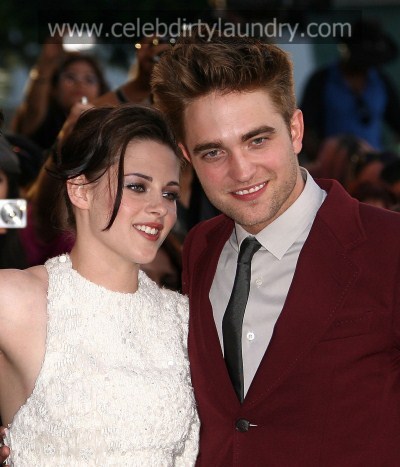 Kristen Stewart – who has been rumoured to be dating  British star Robert Pattinson since they started working together on the ‘Twilight Saga’ – is not afraid to speak her mind, which can sometimes lead to awkward situations, with the 24-year-old actor admitting he isn’t able to be as vocal in his opinions.

“Kristen is always really good but also clearly speaks her mind. That can be a bit uncomfortable. After we shoot a scene she sometimes looks at the director and says, ‘Let’s do that again.’  “If I did that she would probably kill me! She would probably say something like, ‘Shut up! The scene was perfect!’ ”

Robert is constantly travelling with his work and admits there is no longer any place he can call home.   He said: “My home consists of three suitcases which I live out of. Everything is in there.” In order to fit with his lifestyle, Robert has his food specially-prepared and sent to him, which he thinks is for the best as he is such a hopeless cook.    He told Germany’s Sächsische Zeitung newspaper:

“In Los Angeles I started using a delivery service which only delivers fresh and healthy food. Even in the morning I have a bag with healthy food delivered to me. I’ve never in my life lived as healthy as I do now.  “Of course I miss homemade food, but I’m on my own or on the go most of the time. And I can’t cook myself. I only just manage to make some toast. I don’t seem to have the genetic endowments for it. I’m incapable to tell what tastes good and what doesn’t.”