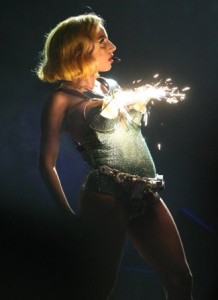 Lady GaGa  has overtaken Britney Spears by 34,000 followers after attracting a staggering 5,735,554 people to her page compared to 5,701,236.   Gaga has now posted a video link on her twitter account thanking fans for making her the most popular person on the micro-blogging site.

Addressing her fans as her “little monsters”, the pop star – who appears in a makeshift crown with a twitter logo on it and waves a magic wand in the video – says: “Hello world, this is Lady Gaga, queen of twitter. I wanted to thank all my beautiful little monsters for following me.   Thank you for beginning my reign as twitter queen.   I vow to always tweet and tweet again.”

The piece was shot backstage at a concert in Tacoma, Washington. The 24-year-old singer is currently on the North American leg of her ‘Monster Ball Tour’.  Gaga currently picks up new followers on twitter at an average of around 171,000 a week, according to website famecount.com which analysed the data.   Although she is the most followed star on twitter, she is not the fastest growing; that title goes to teen pop sensation Justin Bieber, who is amassing an average 800,000 new followers each month.   Other popular tweeters include actor Ashton Kutcher and musician Taylor Swift, who both have over 3 million followers each.