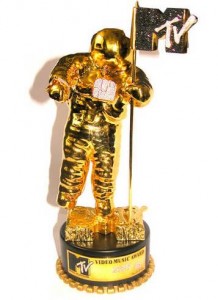 Lady GaGa – who was nominated for a record 13 awards – took home an impressive eight trophies at the prestigious ceremony, including Video of the Year for ‘Bad Romance’.    When accepting the main award – which was presented to her by Cher – an emotional Gaga said: “I was so nervous tonight that I’d let my fans down.
“I promised that if I won this tonight, I’d announce the name of my new record.”

She then went on to tell the thrilled crowd her new album would be called ‘Born This Way’, before singing part of the title song.  The 24-year-old star also won prizes for Best Pop Video, Best Female Video and Best Collaboration – for her ‘Telephone’ duet with Beyonce Knowles – and she thanked her fans for their support.
She said: “Tonight, little monsters, we’re the cool kids at the party.”

Other winners at the show – which was held at Los Angeles’ Nokia Theater and was hosted by Chelsea Handler – included Eminem, Justin Bieber and Jay-Z and Alicia Keys.
Eminem – who won Best Male Video and Best Hip-hop Video – opened the show with ‘Not Afraid’, before teaming up with Rihanna for ‘Love the Way You Lie’, while Best New Artist winner Justin thrilled his fans with a performance of ‘Baby’ outside the Nokia Theater.    Taylor Swift and Kanye West – who caused controversy last year after Kanye interrupted Taylor’s acceptance speech, saying Beyonce should have won – also performed separate songs.

Troubled actress Lindsay Lohan – who has just completed court-ordered rehab treatment – appeared at the start of the show in a pre-recorded sketch, which poked fun at her lifestyle.    Talking about host Chelsea’s self-confessed love of vodka, Lindsay quipped: “Pull it together! Do you think anyone wants to work with a drunk? Take it from me!”