Lindsay Lohan Can Only See Relatives While In Rehab 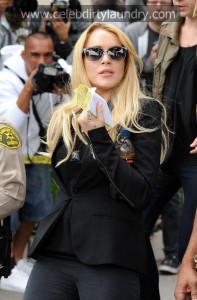 Lindsay Lohan – who was released from prison last week after serving just 13 days of a 90-day sentence for breaking the terms of her probation for a 2007 driving under influence (DUI) conviction – is currently on a 90-day treatment course at the UCLA Medical Center in Los Angeles.

However, staff are said to have banned the troubled star from seeing anyone apart from her blood relations for the first 30 days of her stay in rehab, according to gossip website TMZ.  Mother Dina and sister Ali have already visited Lindsay on a number of occasions but if anyone else in the Lohan family wishes to see Lindsay she has to personally approve them before they’re allowed on site.

Meanwhile, Lindsay’s assistant Elinore is reportedly “super stressed” by having to cope with the demands of Dina and Ali while Lindsay is in rehab.  An insider has revealed Dina has suggested selling off some of her daughter’s clothes and possessions as a lucrative business venture.   Additionally, 16-year-old Ali has had Elinore running around after her all day, which is making her “miserable and incredibly worn out”.