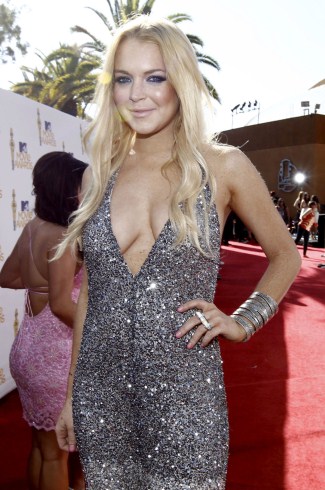 Lindsay Lohan and English rugby star Danny Cipriani were initially seen partying at the Tea Room in Los Angeles on Thursday night (01.07.10), and 24 hours later he was seen entering her apartment at 4am.   It is believed the hunky 22-year-old sportsman – who recently split from his long-term girlfriend Kelly Brook – is smitten with the 24-year-old actress.

The insider revealed: “He’s really fallen for Lindsay. Maybe it’s a bit of a rebound thing from Kelly but Danny can’t get enough of his new girl.   “Kelly is a bit worried and saying Danny’s still only a boy really. Kelly has got her own thing going with new people in her life but obviously has nothing against Danny since her split.”

Lindsay celebrated her birthday on Friday (02.07.10), but the troubled actress continued to court problems when her friend failed to halt her car at a stop sign and was pulled over by police in Los Angeles.   Her long-time assistant Eleonore Lieven was reprimanded by an officer and received citations for having concealed license plates, failing to stop and having a tinted windscreen.