Lindsay Lohan Faces Up To A Year In Jail 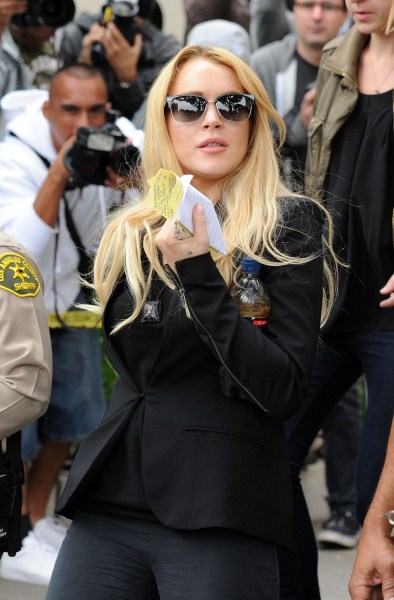 Lindsay Lohan appears in court tomorrow to answer to the charges of failing her drug test while out on bail.  This is why Lohan spent the last couple of weeks at The Betty Ford Centre pretending she is serious about sobering up so that Judge Elden Fox will go easy on her for laughing in the court’s face.    Linday was out on bail for a variety of charges and bench warrants when she produced to positive for cocaine urine samples for her compulsory test.  What an idiot.  Anyway, she was packed off to the rich girls retreat, The Betty Ford Centre, where at least she stayed away from her rotten mooch father Michael, who always wants a piece of her to sell.   While she was there she attempted an escape to supposedly by Coca-Cola – but has otherwise stayed clean.  P  roblem is that the only reason she is in there keeping sober is that if she left then Judge Fox will certainly nail her with real prison time.  After all you can only laugh in the face of the courts so many times before they laugh back!

For breaking her conditions while out on bail the Judge Elden Fox can levy a sentence of up to one year in jail but I say he won’t – what will happen is that Lindsay will get to do a somewhat extended stay at The Betty Ford Centre in lieu of any real punishment for her crimes.  Thus the silly cycle of celebrity justice goes on – as soon as Lindsay is done with Betty Ford and through with mandatory testing she will celebrate with a big bag of coke, some booze, and perhaps other drugs.   You can`t make a person stay clean who wants to be dirty.  Its time the courts recognized this simple empirical fact.