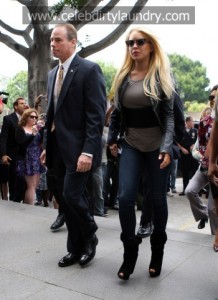 Lindsay Lohan – who left the Century Regional Detention Facility in Lynwood, California, yesterday (02.08.10) after serving just 13 days of a 90-day sentence – hugged Dina Lohan before checking into the UCLA Medical Center to begin her court-ordered 90-day rehab stint.  Dina said: “I was finally able to hug my daughter after two long weeks of speaking to her from behind a glass wall. Lindsay is doing well, and is appreciative of the hundreds of well-wishes she has received.”

Despite Lindsay’s estranged father Michael Lohan claiming the family was upset with her receiving treatment at the facility, Dina insists they are very happy with the help she is getting.

“Lindsay is with the utmost professionals and is in very good hands. I refuse to respond to any of my ex-husband’s false allegations about myself or my family.”  It had been claimed Lindsay will be isolated from her family during her stay in the rehab facility, a move Michael blasted as “stupid”.  He said: “It is beyond a reasonable doubt stupid. Part of Lindsay’s healing process is mending fences with her family.”

Michael has since spoken about Lindsay’s release and said prison could have helped save his daughter’s life.   He told the Kyle and Jackie O radio show:

“I thought prison would be a horrible thing but I have to say an absolute miracle took place with regard to Lindsay turning her life around. It was a spiritual awakening for her and I hope it continues in rehab.”

Lindsay was sentenced to 90 days in prison and 90 days in rehab last month after violating the terms of probation set from her 2007 driving under the influence (DUI) conviction.