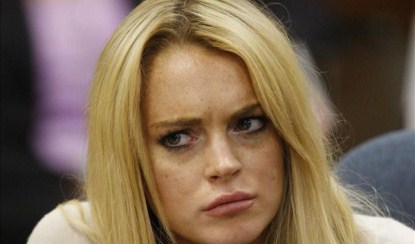 As we reported yesterday Lindsay Lohan was moved to a secret location largely due to a conflict she had with an employee of Betty Ford.  When Lindsay returned past curfew to Betty Ford the employee, who is now identified as Dawn Holland demanded she take a breathalyzer test since she had been with 2 friends at a alcohol infested party.  Well not only did Lindsay refuse to take the test but she also pushed Dawn.  Lindsay claims Dawn grabbed her after she tried to sneak in after missing curfew.

Dawn went to the police and they are investigating the incident.  Well Dawn also did an interview with TMZ for $15,000 and was promptly fired by Betty Ford for violating patient confidentiality.

How does all this put Lindsay in Jail?  “Judge Fox made it very clear to Lindsay: a dirty test, or a refusal to submit to a test, would be counted and considered as a dirty test,” according to a confidential source.  Lindsay clearly refused to take the test upon her late return to the clinic and only the next morning, once any alcohol was well out of her system did she take the test, passing it.  Since this is a clear violation of the Judge’s orders Lindsay is in big trouble and faces 6 months in jail for this clear breach of her release conditions.

The secret source says: “Lindsay is in very, very big trouble. It’s very likely Judge Fox will haul her into court in the next week to deal with this,” and “Judge Fox had been willing to give her a second chance, but it appears that she has squandered that. She is seriously looking at six months in county jail.”