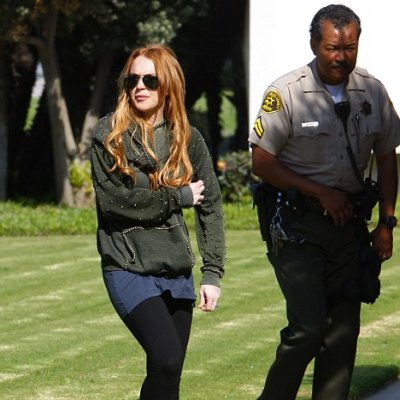 Lindsay Lohan has been remanded into custody after failing two drug tests, one for amphetamines and the other for cocaine.

She appeared before Judge Elden Fox, who tossed her butt back in jail – at least for a little while. TMZ reports:

Lindsay Lohan is in custody … after Judge Elden Fox shockingly denied her bail … and Lindsay could be sitting there until October 22.

Lindsay was in court because she failed two drug tests — in one she tested positive for cocaine and the other for Adderall.

Judge Fox did not hear any argument from the lawyers before making his ruling.

Michael Lohan showed up to court first so that Dina couldn’t have him tossed out on his butt. There has been no word as to whether or not the judge let him speak as he previously said he wanted, but we’re guessing that Judge Fox told him to STFU or GTFO.

How long should she have to sit in jail before realizing that coke is bad for her? What do you think?

Update: We’ve just learned that Lindsay will sit in the pokey for a whopping four weeks. Despite failing her two drug tests, it was widely believed that since her offenses were misdemeanors, she would post bail and walk out a free woman.

Speaking about his daughter’s sentencing outside the courthouse, Michael Lohan said, “Jail is not good for anyone. It doesn’t help to rehabilitate anyone. I’ve been there myself. Lindsay knows what she needs and knows what she wants but unfortunately it’s a little too late. She doesn’t belong behind bars. She hasn’t got help for her addictions yet. Leaving Los Angeles and going to New York Fashion Week was the biggest mistake in the world. There are drugs everywhere. She was staying in a hotel unsupervised. She’s hanging around the wrong people in the wrong places.  Why is everyone pointing the finger at Lindsay?”

OTHER SITES WE LOVE