Lindsay Lohan May Face Jail & Is Prepared For Consequences 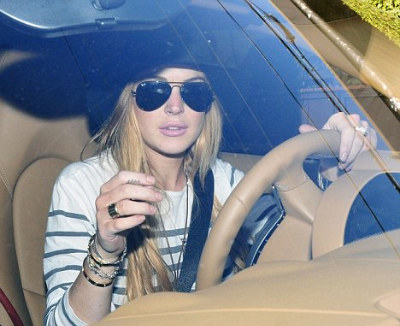 As we’ve reported just yesterday, Lindsay Lohan has already failed one drug test, which was tested positive for cocaine. Now, we’ve learned that she flunked another test, but it hasn’t been revealed what that one was for.

According to the terms of her probation, she could be sent back to jail for a period of 30 days for each instance that she failed her drug tests. Instead of whining and blubbering on her attorney’s shoulder, she took to her Twitter account to say that she’s basically only human.

She tweeted, “Regrettably, I did in fact fail my most recent drug test and if I am asked, I am prepared to appear before judge Fox next week as a result. Substance abuse is a disease, which unfortunately doesn’t go away over night. I am working hard to overcome it and am taking positive steps forward every day. I am testing every single day and doing what I must do to prevent any mishaps in the future. This was certainly a setback for me but I am taking responsibility for my actions and I’m prepared to face the consequences. I am so thankful for the support of my fans, loved ones and immediate family, who understand that i am trying hard, but also that I am a work in progress, just as anyone else. I am keeping my faith, and I am hopeful….Thank you all!!!”

Why do I suddenly feel like a cheerleader for the wrong team here? I hate to say it, but I think Lindsay is growing up. Who knew?!?