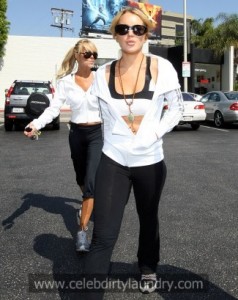 Lindsay Lohan, 25 – who is only six days into a 90-day jail sentence for breaking the terms of her probation for a 2007 driving under the influence (DUI) charge – had hoped to be released this week due to prison overcrowding, but a jail spokesman has confirmed that will not happen. Los Angeles County Sheriff’s Department representative Steve Whitmore said: “She won’t be released this week.”

Her sentence has already been reduced to 88 days because of time she has previously spent in custody, but overcrowding at the Century Regional Correctional Facility in Lynwood, California, means she could still be released as early as August 1.   Meanwhile, Lindsay received a second visit from her mother Dina and sister Ali yesterday (26.07.10).   The pair were not allowed to see Lindsay at the weekend as they had used up their visiting rights on her first day in prison last Wednesday (21.07.10), and so took the first opportunity they could to see her.

A prison source said: “Lindsay might get visitors after the official visiting hours are over for the other inmates for security reasons. It’s for the safety of everyone.”   indsay’s estranged father Michael has also reached out to some Hollywood stars to ask them to help his daughter “get her life back” after she completes her sentence and subsequent mandatory rehab period.

He told Nashville radio station 107.5 The River: “My people are reaching out to Robert Downey Jr. and to Mark Wahlberg. I know both of them and Mark is a tremendous human being.   “Hopefully they’ll see her before she gets out and she’ll get in this rehab and get off these prescription meds, and she’ll get her life back.”

Michael also revealed his daughter is now “only on two medications”.   He said: “She’s only on two medications right now. Ambien for sleeping, I can understand that.   “But this Adderall stuff has got to be stopped. Seven out of 10 kids in college are on this stuff and it’s no more than methamphetamine! It’s speed.”