Lindsay Lohan To Host Radio Show With Mom For $1 Million? 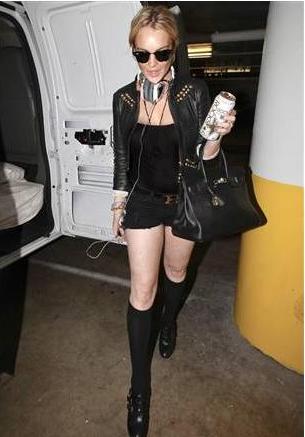 Lindsay Lohan pictured above in the first pic since she left rehab  is only out of rehab for one day and the offers are pouring in.   First to write a  all book and now Lindsay has reportedly been offered $1 Million to host a radio show with Mom Dina.

Who knew jail could be so lucrative?  So if negations go well you will soon be hearing Lindsay and Dina on the Long Island station “The station, Party 105” .   There would also ba an advice segment for fans to call in.    hmmm wonder what advice Lindsay will give?   Which crack pipe is the best, where do buy cocaine and from who, how to get out of jail fast , or how to accesorize that prison orange jumpsuit LMAO

Radar online is reporting that Lindsay and Mom will be talking about a wide range of topics from Fashion to Entertainment.  No word yet on if Lindsay is going to accept the gig.  She might just want to take a break and take some down time.

The station said in a statement:

“ We think that hosting a morning program would be the perfect gig for Lohan. Besides her experience in film, TV and music, she has appeared on radio programs in the past on Radio Disney and other stations. If Lohan wants to take some time off from Hollywood and spend some much-needed R&R with her family but still needs to atone for her reported $600,000 in credit card debt, hosting Party 105’s morning show would be an ideal way for the starlet to reconnect with her fans – starting with those closest to her hometown who have followed her career from the beginning.”