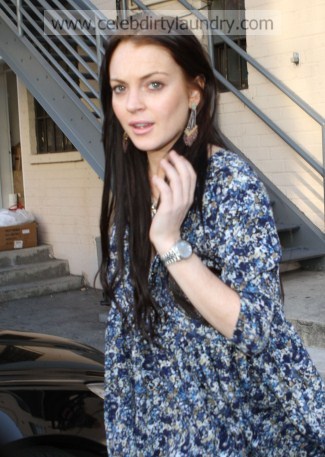 The troubled actress was to play a student working on a deserted island in ‘The Other Side’, but sources close to the film told website TMZ she was let go from the project because her name isn’t enough to guarantee box office success.

The film’s writer and director, David Michaels, was diplomatic about Lindsay’s departure, saying: “Our team simply chose to move on from Lindsay and we’ll soon be announcing a replacement."   Other actors involved in the film include Woody Harrelson, Giovanni Ribisi and singer Alanis Morissette.

The lead role in which Lindsay was cast was also at one time associated with late actress Brittany Murphy, who tragically died of pneumonia last year aged 32.   Former child star Lindsay has not appeared in a film that has been a hit with critics or at the box office since a bit part in ‘Bobby’ in 2006. Her last film, ‘I Know Who Killed Me’ in 2007 flopped.   The 23-year-old actress’ personal troubles have done little to help her career, with her father, Michael Lohan, saying he believes she is taking drugs and this week arriving at her Hollywood home with police officers in an attempt to stage an ‘intervention’ and take her to rehab.

Michael said: "We all know she’s drinking and if she’s on prescription drugs, you can’t do both. And then there’s cocaine, of course."   Lindsay reacted angrily to her father’s actions, posting messages on her twitter page saying she wanted to take out a restraining order against him, and calling him her “ex-dad”.   She wrote: “I have no choice but to make this public, due to my sister’s safety, as well as my own, "my ex-dad" just WALKED INTO MY APT like the devil’s advocate with officers (sic).   “my lawyer isn’t answering I NEED A RESTRAINING ORDER! MY SISTER AND FRIEND TOO!!!!! HE’S NUTS!!! (sic).” Photo: Fame Pictures