LMAO Can you just see Lady Gaga As The Face Of Tea? 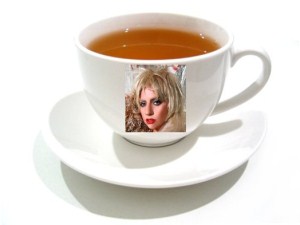 Lady Gaga – who is well known for her love of tea – is reportedly being pursued by several major companies who want her to be their brand ambassador.   So far, distinguished English firm Twinings is the most determined to bag the contract with the eccentric pop star.  They have made a multi-million pound offer to her management and have also instructed expert tea makers to invent a new oriental flavour especially for Gaga which they hope will appeal to her fans and younger drinkers around the globe.  A source told The Sun newspaper:

“Her management have received a load of offers from major tea companies but Twinings are the frontrunners.  “They want to launch a new tea with her face on it. Names like The Taste Of Gaga are being batted about. The idea is to have tasting sessions in which she would participate.  “The tasters are coming up with a tea with an oriental flavour. They want to market tea to a new, younger generation – particularly in America. Gaga is making drinking tea cool again.”

The 24-year-old star – real name Stefani Germanotta – is often pictured sipping tea from her favourite cup and saucer set and rarely travels anywhere without it.   She threw a huge tantrum last year when she lost the teacup.  The ‘Poker Face’ singer accidentally left the blue flowered cup at a restaurant in London’s Metropolitan Hotel and sent a taxi on a £35 round trip from her suite at Blakes Hotel to collect it.     A source said:

“She kicked up a fuss and demanded someone get her cup and saucer back.   “She wouldn’t drink out of anything else. It just looked like any other cup and saucer and said ‘Made in China’ on the bottom. It seemed a lot of fuss over nothing.”