Lohan Under Legal Microscope – Judge Sets Lohan Up To Fail 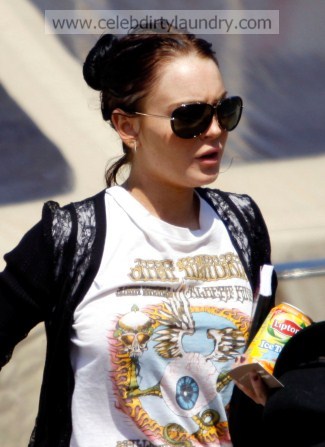 The Judge, Marsha Revel, insists that Lindsay Lohan wear the SCRAM alcohol sensitive bracelet as well as take random weekly drug tests – any failure will result in the Judge revoking Lindsay’s bail and sending her to jail.  Lindsay Lohan is addicted to drugs and alcohol according to close friends so it seems absurd to release her under the conditions above – what is the point?  She needs treatment and most likely a serious stint at a really effective rehab center will be what it takes to cure her. And of course this will only work if Lindsay desperately wants to get better and sober up for good.   But there is no evidence that she does crave sobriety so we predict that jail time is in Ms. Lohan’s near future.

We think that this whole charade is silly.  Revoke Lindsay’s driver’s license and be done with it. It is not the law’s or society’s business to interfere with Lohan’s alcohol or drug habits – leave the kid alone – her legal problems stem from impaired driving so simply suspending her right to drive eliminates the problem without making a big deal out of what is not our business.   It is not the job of the court system to deal with people’s psychological problems – it is the job of the court system to administer the law and protect society from law breakers.   In this case all it takes is to keep Lindsay Lohan from driving and if she refuses to stay sober when she drives or insists on driving on a suspended permit then we must lock her up so she learns that she can not simply endanger the rest of us by driving drunk or high.

Another issue here is that Lohan has consistently disobeyed court orders and ignored her sentences.   She has made a mockery of Judge Revel and her court and undoubtedly this is the main reason for Judge Revel’s vindictive approach to Lohan now. An alcohol bracelet and random drug testing is almost guaranteed to send Ms. Lohan to Jail.   Many people think that is exactly what Lindsay deserves – statements such as "if this were you or me we’d be in jail now" abound and are probably true.   People hate injustice and are naturally very sensitive to it so when an already talentless and spoiled celebrity like Lindsay Lohan appears to be beating the legal system people become irate.   Putting Lohan behind bars would be a very popular move today.   Photo: Fame Pictures