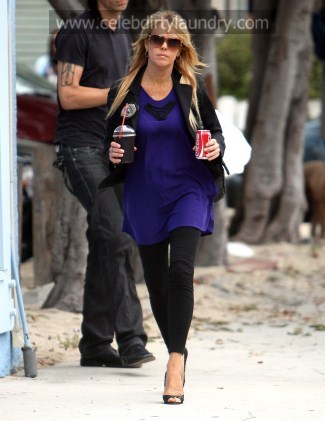 Dina Lohan tried to use a "VIP" card to get free ice cream at a Carvel store Thursday but was denied.   The employee would not return the card and police were called! Apparently 4 cop cars and a police helicopter were summoned to take this desperado down!   In an official statement Carvel said:

"Unfortunately, the Lohan family has been abusing the card. While the card was issued in Lindsay’s name only, her extended family has repeatedly used the card without her present.  At first, we graciously honored their requests while explaining that the Black Card was not a carte blanc for unlimited Carvel Ice Cream for the extended Lohan family and friends. After more than six months of numerous and large orders for ice cream, we finally had to cut off the card and take it back."

It seems that what we are able to infer about the Lohans, that they are a classless lot of marginally talented trailor trash who have no limits in terms of how low they will go, is borne out by this story. Imagine the entitled arrogance, the chutzpah, to ride the only one in the family with any talent, Lindsay, as far and as hard as they can – even for free ice cream.  If they could package and sell poor stoned and drunk Lindsay by the pound they would. Lindsay’s substance abuse and sexual peccadilloes are the clear signs of an unloved child acting out.  Her greedy parents want what Lindsay’s fame has brought them – what it buys them – for Lindsay herself there was and is much too little love.