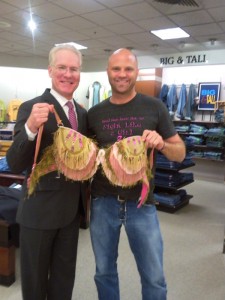 The queen of afternoon television talk shows, Oprah Winfrey, has met the reigning king of Breast Cancer Awareness; Dusty Showers!  After a recent appearance on Oprah, Dusty Showers is perhaps now the most recognizable man in the ongoing battle against breast cancer.   He is a strong man in a fancy pink bra, father of two beautiful daughters, and has an intense passion for battling the cancer that has invaded his family’s life.

According to the latest statistics, breast cancer is diagnosed in one out of every eight females. Breast cancer death rates are higher than those for any other types of cancer.   While males can also fall victim to breast cancer, the percentage is much lower and can be just as deadly.   It began six years ago when Dusty Showers half-heartedly showed up for a Breast Cancer 3-Day walk after his ex-wife and ex-mother-in-law asked him to attend. Both ladies are breast cancer survivors.

That eventful walk ignited an ever-growing passion in Dusty Showers and since then, he has spent every spare moment trying to raise awareness and money to fight a disease which wreaks havoc in the lives of millions of women.   The publicity that Dusty generated resulted in his appearance recently on the Oprah Winfrey Show where he was the recipient of “Make Over My Man.”

“It was an awesome experience to be on Oprah,” declared Dusty. “They had me in a cool shirt and vest including a tie along with some casual slacks.”  “Most important, however, was the attention that my appearance on the show brought to the effort for the fight against breast cancer.”

The thirty-nine-year-old man (Dusty) who catches “Creepy Crawlers” for a living has maintained his passion for the breast cancer cause for six years now. His motivation is simple:

“I see women who are bald because of cancer treatments,” added Dusty.  “They are my friends. I love them and I want to help them. Do something larger than you!”
In order to further promote breast cancer awareness and research, Dusty started an organization called “The 2nd Baseman.”

Atop the website page is a slogan that reads, “Because Real Men Know How To Fight Like A Girl.”  The mission of “The 2nd Baseman” is “to bring about awareness of how widespread breast cancer is and the importance of early detection through self-exams and mammograms.”   “We do outrageous acts for the cause,” claimed Dusty. “That’s why I wear a pink bra and sometimes a pink cowboy hat. It creates attention and helps reach our goal to educate as many people as possible about early detection and finding a cure for breast cancer.”