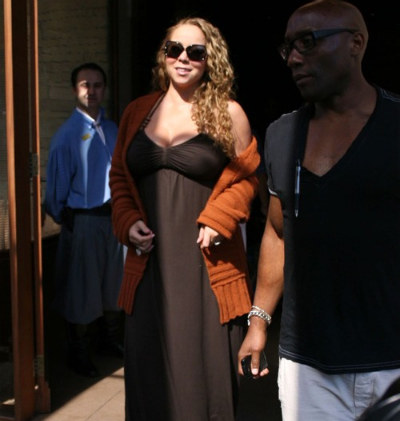 We get it, you don’t want to tell anyone until you’re in the clear. But it’s getting more and more obvious as time wears on.

Mariah has been spotted wearing extra baggy dresses and her handlers seem to be on high alert in case she should stumble. Even though her husband Nick Cannon won’t discuss it, she won’t confirm what we already know.

In a new interview, she said, “I appreciate everyone’s well wishes. But I am very superstitious,” she wrote on her website Wednesday. “When the time is right, everyone will know–even Cindi Berger.”

Ummm, so isn’t this just like an official confirmation? If it’s not, then what are we waiting for the right time for? That wouldn’t make sense at all. She wants to release the official happy news herself, but her baby bump is already giving her away.

Mariah, tell us something we don’t know!