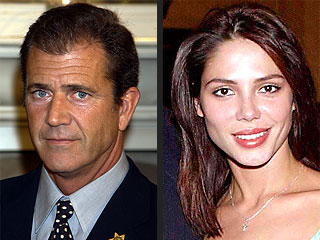 Mel Gibson in a court declaration says Oksana Grigorieva has lived rent free for years by imposing on friends and boyfriends, anyone who would foot the bill.

TMZ reports that  Mel said  ”  “When Oksana and I began dating, she and her son, Alexander (Sacha), who she shares custody of with Sacha’s father, actor Timothy Dalton, were living in the home of a friend, music producer David Foster, and I was living in my present home in Malibu.  Oksana would often complain to me that she did not like having to make the drive from Malibu to Sherman Oaks, where Sacha was enrolled in school during the weeks Sacha was in her custody.”

One can see that Oksana is already expecting Mel to provide closer housing for her.  Of course one wonders why Mel didn’t realize early on in his relationship that Oksana is a gold-digging tramp?

Mel also said that David Foster wanted Oksana out – that he was tired of paying to support the freeloader and that he wanted his house back.

So Mel foolishly went along with Oksana’s ploy and bought a house for her in her son’s school district, Sherman Oaks, so she had another place to live for free.  This was a 3500 sq. foot 4-bedroom house where Mel stayed over sometimes.

Gibson concludes, “Our relationship was always a tumultuous one and Oksana and I argued with one another frequently about recurring problems in our relationship.  As a result, I left the Sherman Oaks residence and moved back into my home in Malibu several times prior to March, 2010, when our dating relationship finally came to an end.”

Sure – Okasana said to herself that Mel Gibson was not going to get away from her for free – first the house, then a $15 million settlement with which she was very dissatisfied – and what is sleazy Oksana going for next?  I bet Mel regrets the day he met her – as does every man she has used.