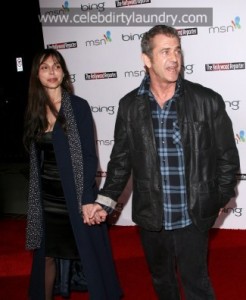 Mel Gibson – who has been accused of domestic violence against Oksana Grigorieva, the mother of his eight-month-old daughter Lucia – allegedly pulled a gun on the Russian singer and said he would shoot her, their daughter and her 12-year-old son Alexander, before turning the weapon on himself.   Speaking about the January 6 incident, a source told RadarOnline.com: “Mel punched her in the mouth and then again in the side of the head.  “Oksana has told authorities it was horrific and she thought she was going to die.”  hmmmm….now I wonder who that source is… let me think a moment Okasana?

The insider claims Oksana, 40, has told authorities she was holding Lucia during the alleged attack and fell backwards on the bed as the actor tried to choke her.  Mel Gibson then reportedly yelled “f**k you” and called Oksana a “f**king ****”.  Alexander – whose father is former James Bond star Timothy Dalton – is believed to have witnessed the row in the bedroom and was interviewed by child protection services agents last Friday (16.07.10).  This is getting more and more pathetic now she is involving her poor son.  Timothy Dalton should come and take the kid to live with him.  Alexander would be a lot better off.

Mel is now facing a criminal investigation on domestic battery charges by the Los Angeles County Sheriff’s Department and is part of a Department of Children and Family Services investigation.  Investigators will also be looking at the actor’s phone records as it was claimed that after Oksana fled with the children – barefoot and in her pyjamas – Mel repeatedly called her and threatened her.   Meanwhile, Oksana is reportedly planning on filing a suit for defamation and slander against Mel over the expletive-laced, hate-filled recordings that were recently leaked online.

A source explained: “Oksana’s reputation and character has been damaged after what Mel said. He has made her out to be a gold-digger and extortionist, which she is not, and she plans to defend herself against his baseless claims.”  OMG this is getting more and more ridiculous.  These two should just handle their dirty laundry in private!  Maybe not ;-) then we would not be able to report it LOL….